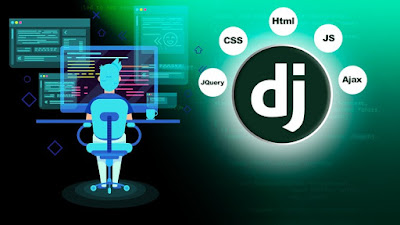 Description
WANT TO LEARN Python Django?
“Want to make a good beginning in Django? Then this course is for you”
The content of the course is delivered in a very clear manner we will learn everything step by step and build many APPS. First of We will never use Console because its boring so we will learn how to create real app and that will make you eager.
THIS IS THE ONE OF THE BEST Django COURSE WHO WANTS TO LEARN PYTHON Django AND CREATE REAL APPS IN Django.
This is the BEST COURSE CHOICE for completely beginners — anybody who wants to be a Django programmer but hasn’t any idea of where to begin.
Here’s great news: If you can type, install a program, and open your browser in your Computer, you’re good to go.
What is Django...
Django is the best programming language to Create Web Apps. Why? Because it’s very simple to learn and Django allows you create your app easily.
WHY this Django course?
You’re a newcomer to coding and want to learn everything from scratch? You’ll learn Django programming language, with clear instruction and well detailed videos. And you’ll write your own codes
What We Will Do?
The BEST way to become a proficient programmer its about writing lots of code and learn different examples. Don't worry we will do that we will type a lot of code and build many different apps. We will learn how to use functions in Django and create different real apps. We will also create database apps in Python and learn how to use Sqlite and Mysql.
Other good news is we will also create different apps in Django and you will learn Django programming.
Finally i want to say what Python is very powerful language you can create many different apps with it.