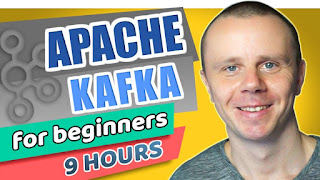 Description
This course is all about Apache Kafka

Understand HOW Apache Kafka works and learn its core features ON PRACTICE. This is 80% practice course without no useless demos!

Become a master of Apache Kafka by understanding and practicing its architecture and main features.

All project files and mostly used commands are available in the GitHub repository.

This is the most complete practical Apache Kafka guide here on Udemy that includes tons of practical activities. Most important is that you will learn how Apache Kafka works and knowing it you will be able much more easier use its features and fix mistakes in the future after you'll finish this course. You can have zero knowledge about Apache Kafka, Java, Node.js or Python. All will be taught from scratch, from basic to advanced features. If you want to get deep knowledge of Apache Kafka this course is for you!

Afterwards we will jump into tons of practice activities and use different Apache Kafka features and built-in scripts. You will launch Zookeeper, multiple Brokers, Console Consumer and Console Producer. Also you will test performance of the Kafka Cluster using built-in utility called Performance Monitor.

In practice sections you will perform multiple practice Apache activities:

During the course you will need to view and edit text files. For that you will NOT use terminal. Instead you will use GUI application VisualStudio Code. Also all configuration files and project files are available in the GitHub repository. This means that during this course you will also learn how to use :

But most important is that you will UNDERSTAND Apache Kafka.

You will also get 30-days money-back guarantee. No questions asked!